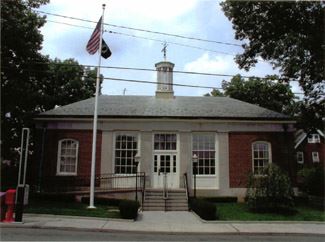 The one-story, three bay post office is of red brick laid in common bond with limestone trim. The center bay of the main elevation is framed by limestone pilasters and features a limestone frieze that reads "United States Post Office, Pompton Lakes, New Jersey." Single windows (8 / 12 wood sash) also flank the entrance. The windows in the end bays and at the side elevations have segmental-arched brick lintels and limestone sills. The central, granite staircase has cast iron railings terminating in lamp posts.

The post office is located in a mixed, residential and commercial neighborhood. It is bounded on the east by late 19th and early 20th century residences; on the south by Lakeside Avenue and the High School; on the north and west by commercial properties.

The Pompton Lakes Post Office was designed in 1936 by Louis A. Simon, Supervising Architect for the Department of Treasury, 1933-1939, and built in 1937 by Shurman Construction Corporation of Passaic, New Jersey. While the building was not built as part of the Works Progress Administration (WPA) undertakings, it was one of many public buildings constructed during the 1930s. It is typical of 1930s construction in its materials, symmetrical massing, and historical sources.

A portrait of Benjamin Franklin, made of cast stone by the artist Stirling Calder, is located in the lobby of the Pompton Lakes Post Office. Calder, a student of Thomas Eakins and Thomas Anshutz at the Pennsylvania Academy, and the father of sculptor Alexander Calder, was instrumental in organizing the sculptural program for the 1915 Panama-Pacific Exposition in San Francisco.

The 1920 Sanborn Fire Insurance Map shows the Post Office location as the site of DuPont Club House, which included a pool, bowling alley, bar, and tennis courts the rear. By 1929, the Club House had been converted to a garage.
About Our
Community
News
Flashes
Sign up for
Emergency
Notifications
Flood
Readiness
Chemours/Dupont
Information
[]