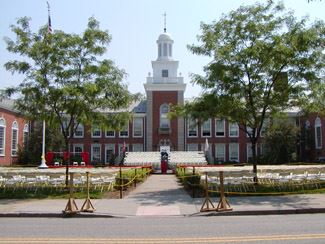 The original High School Building is U shaped in plan, with gable center block and hipped wings. Two stories in height, it is five bays deep. A cupola caps the gabled block Architectural details include stone quoining, flat arch lintels (with keystones at the first story), sills and basement. Windows are 12 / 12 wood sash; the openings at the wings are arched. Basement-level windows are square. Triple portal entrances are located at each wing. They are defined by pediment surrounds, garlanded panels, and an oculus window in the gable end.

The High School was enlarged by an L shaped 1959 addition to the east. The addition is contemporary in style, of red brick with red aluminum panels and steel windows.

The High School faces north toward Lakeside Avenue and the Pompton Lakes Post Office. It is bounded by a large parking lot that serves the downtown commercial area to the west and by early twentieth-century residential structures to the south and east.

Like Pompton Lakes Post Office that it faces, the High School is a good example for the stylistic historicism favored for large-scale public buildings during the 1930s.

The site is identified on Sanborn Fire Insurance Maps of the 1920s as the site of the Pompton Silk Mills and the Pompton Valley Community House, a social center with reception room, dance hall, and gymnasium. The social center was originally constructed by DuPont as housing for workers during World War I.

Prior to the construction of the Pompton Lakes High School, area students were educated in Butler, New Jersey. With the erection of the new building, students were attracted from Oakland, Wayne and Midland Park.
About Our
Community
News
Flashes
Sign up for
Emergency
Notifications
Flood
Readiness
Chemours/Dupont
Information
[]