The Battleship USS Maine was dispatched from Key West, Florida on January 24, 1898 and while at anchor at Havana, Cuba on February 15, 1898 suffered an explosion and fire that killed two-thirds of her crew; seventeen were residents of New Jersey.

The ship sank immediately and was finally raised and disposed of by sinking at sea.  Whatever the cause of the explosion, the cry of  “Remember the Maine” called our country and its citizens to war two months later in April of 1898.  In a scant six months the Spanish-American War was fought and settled. 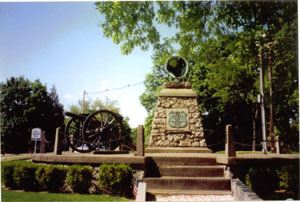 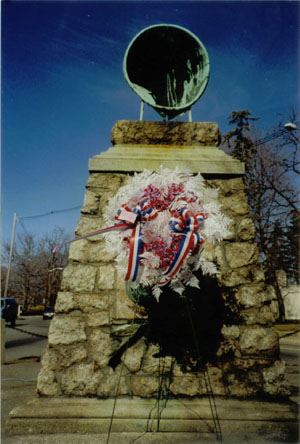 When the Maine was raised in preparation for burial at sea in 1905, key pieces were placed around the United States for memorials to the sailors that lost their lives in the sinking and the men killed in this war.

In 1914 the Borough of Pompton Lakes erected a Memorial and constructed a park for the USS Maine that houses and displays the original funnel of the battleship.

On Sunday, February 15, 1998, the Borough of Pompton Lakes and the USS Battleship Maine Centennial Committee invited the public to a Memorial Service commemorating the 100th Anniversary of the sinking and loss of 260 crewmembers of the Battleship USS Maine.

The Memorial Service was held at the USS Maine Memorial, located at Triangle Park on Hamburg Turnpike, Pompton Lakes, New Jersey and included a rededication of the Memorial which contains the part of the USS Maine. The ceremony also included a reading of the names of the USS Maine crew members killed or missing in action with the tolling of the memorial bell.
About Our
Community
News
Flashes
Sign up for
Emergency
Notifications
Flood
Readiness
Chemours/Dupont
Information
[]