Pompton Reformed Church was designated an historic site on March 20, 2001. 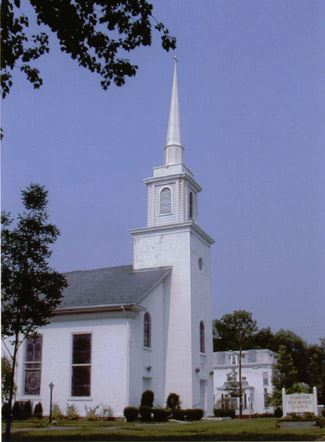 The Pompton Reformed Church is one and a half stories in height and three bays wide. The church is set on a north-south axis, with the entrance at the south. There are three entries, one in each bay. The center bay breaks forward and is accentuated by a square brick tower with an aluminum sided lantern and steeple. An arched, stained glass window is located at the second story of each bay of the main façade. Windows along the sides are regularly spaced, double-hung stained glass windows.

The church has had two additions to the west. The first, completed in 1956, is set perpendicular to the church, and adjoins the original building at the rear. It is one and a half stories tall, and features a side gabled, slate roof with gabled dormers and a full width front porch with arched spandrels. The second addition (1974) adjoins the first addition to the west. It is a one story, four bay, red brick structure with a hipped roof and cast stone detailing.

The Pompton Reformed Church was formed by members of the Pompton Plains Church (founded 1735) who resided in what became Pompton Lakes. They founded the new church in 1812, and completed construction of the church by 1814. The first pastor was Reverand Jacob T. Field.

A frame chapel, constructed in 1886, once stood to the west of the Church, between the church and the parsonage. The chapel was enlarged in 1911 and 1928, and in 1950, classrooms and an auditorium were built underneath the Chapel. The Chapel was replaced in 1974 by Gerrit Heemstra Memorial Building. The church was extended to the rear, to provide seating for a total of 500 people, and to the west, to provide for church offices and classrooms, 1956.

The cemetery, located to the rear of the church, includes the grave of A.P. Terhune (1872-1942), noted author and area resident.
About Our
Community
News
Flashes
Sign up for
Emergency
Notifications
Flood
Readiness
Chemours/Dupont
Information
[]