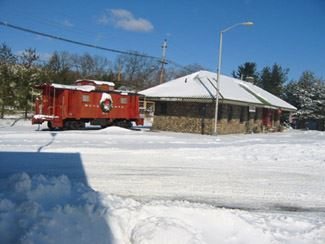 The Train Station is a one story, rubble stone building with a hipped, green tiled roof. The roof features broad, overhanging eaves. The windows, 6 / 1 and 1 / 1 wood sash have concrete lintels and sills; the oriel window on the south elevation has a dentilled wood cornice. The northeast corner of the station has been enclosed with concrete block, as has the center door on the north elevation. The Christian Science Reading Room, housed at the east end of the station, has an aluminum and glass storefront on the south façade.

The station is located on the south side of the New York, Susquehanna, and Western railroad tracks, near the intersection of Lakeside and Wanaque Avenues. A red caboose, dated 1948, sits on sidetracks to the west of the station.

The present train station is the second depot to be located in Pompton Lakes. The first was constructed in 1871, and sat on the north side of the tracks, opposite the present location. One of the men responsible for the arrival of the railroad in Pompton Lakes in 1871 was Martin J. Ryerson, a relative of Peter Ryerson, owner of the Pompton Ironworks. Ryerson donated miles of right-of-way to the railroad, ultimately becoming one of the first directors of the railroad and a Vice-President.

The caboose, moved to Pompton Lakes in 1988 and now located on sidetracks constructed specifically for the purpose of display, was manufactured by the International Railway Car and Equipment Manufacturing Company of Kenton, Ohio, and purchased by New York, Susquehanna, and Western. The Caboose once ran on the line passing through Pompton Lakes.

The station was converted for commercial use when commuter service ceased in 1966. While it currently serves as a bus stop, New Jersey Transit is planning to reactivate the line for rail commuters by the year 1997.
About Our
Community
News
Flashes
Sign up for
Emergency
Notifications
Flood
Readiness
Chemours/Dupont
Information
[]