The Bartholf Homestead was designated as an historical site on April 20, 1999. 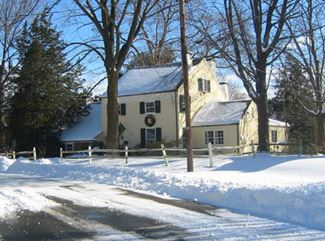 
The Bartholf Homestead faces north toward Broadway. To the east is Fairview, to the south is Lakeside Avenue; to the west is 20th century residential development.

The Bartholf Homestead is the oldest dwelling in Pompton Lakes. The original block was constructed of stone in 1697 on land deeded to the Bartholfs by the English crown. This block may have served as the first Post Office in the Pompton area.

The House remained in the Bartholf family until circa 1950, when it was sold following the death of Annie Bartholf Moffatt.

The Bartholf Homestead is believed to have served as a campsite for soldiers of Washington's army during the Revolutionary War. According to Ethel Vreeland's history of Pompton Lakes, Mrs. Moffat donated two Officer's Manuals, found in the house, to the Pompton Lakes Women's Club.
About Our
Community
News
Flashes
Sign up for
Emergency
Notifications
Flood
Readiness
Chemours/Dupont
Information
[]